A gift from Italy!

On 26th April in English class we opened a box from Italy. It was very exciting and fun. In the box there were a lots of things: letters, posters, sweets, traditional food, recipes…
The letter was about different things but one that talked about who they are  was very cool because they burnt the paper and the things that they said were fantastic.
My favourite thing was the traditional food. The biscuits were delicious, I think that it was my favourite thing because I am a food lover.
E.N.

Today we received a box from our project partners from Italy. There are many posters and photos of children and traditional Easter food. In the class, we have eaten some delicious cookies. I loved it. I think I would like to send another box with traditional things and photos because it is a good way to learn English.


A special package arrived a week ago. All this was accompanied by Cocco, the mascot of our senders. While we had the box, we were all very nervous because we did not know its contents.
They sent us cookies, tourist brochures, information about the most important cities in Italy and typical recipes there.
Everything they sent us is exposed in our class.
A.L.

Today, we received a parcel from Italy.

There were a lot of things: a mascot, tourist guide, letters,   chocolate eggs, biscuits, a drawing of mascot, cardboard…

My favorite things are biscuits and chocolate eggs.

The packet is very interesting!
A.N.

We got a box from Italy: it brought us a chocolate egg, from their country, a poster about the most famous places, some good cookies and also a pen with photos and videos. It was amazing!!!!!!!!

A.V.
On Tuesday we recived a packet of Italy. There was a letter. There was a pet and his name is Cecco. There were a lot of biscuits and a big egg of chocolate with a surprise inside. There were tourist guides and suvenirs. There was a book of recipes. My favourite was the letter, it is very original.
C.T.

Today, we received a box. There were some cookies, some information about Italy, a chocolate egg, a recipe of tiramisu, information about the tower pisa, a stuffed animal, it was a teddy bear, a bear drawing...
L.P.

On Tuesday 25th, we received a box from Italy.
It was full of things. There was a drawing from Cecco, the italian mascot. Then we find a letter. There also was a poster Pisa Tower, from Florence and a small one from where are they from. There was a small book with italian recipes. Then we found two boxes with italian cookies, the cookies was delicious! There also was a pen with a video from the school from Italy. There was a bit of information from some sports that they do in Italy. Finally there was a very big chocolate egg and it was delicious.

M.H.
On 26th of May we received a box from Italy, in which there were many things, some were: cookies, a chocolate egg, letters, posters ... What I liked most was food, I like to try food from other countries, we all liked to receive the box, it was very exciting!
The letters said things about Italy like Rome, the tower of Pisa ... We loved opening it all together, we took many photos too, there were pizza recipes, tiramisu ...

Our etwinning school partner in Italy  sent  us  a  packet  with  posters,   biscuits, a  map  of   Italy,  a  giant  chocolate  egg  and triptych.  I really  like  biscuits  and  a  chocolate  egg.
Everyone in my class like the package.
X. R. 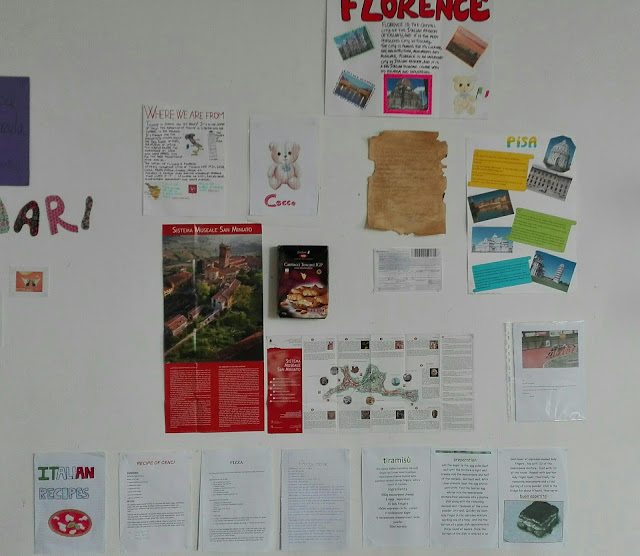 Publicat per yaloy@santbonaventura.org a 2:55 Cap comentari: